Whistler was one of my favorite races last year.  I was looking forward to doing it again – one of the few times I have repeated the same race.  As a somewhat “local” event to Seattle, there are always a lot of friends and teammates racing, the location is beautiful, and it’s easy for me to get to and from quickly.  It’s also near the first in the qualifying series for the 2018 70.3 World Championship, and I was cautiously hoping to place high enough my age group to get a spot to go to South Africa.  If I didn’t, there would still be plenty of time to do a backup race or two later on in the season. 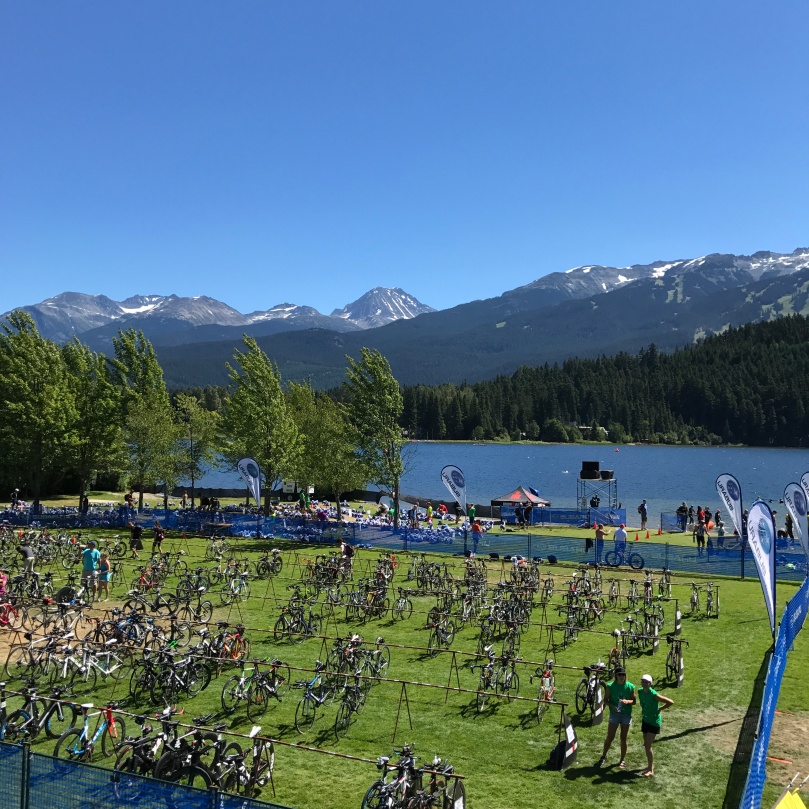 Pre-race
Again, I did this in a quick weekend.  I arrived on Saturday around 9 AM, parked, checked in, and rode my bike down to Rainbow Park.  Once my transition was set up, I took the shuttle bus back to town, ate a big lunch, and my pre-race day was done.  In the morning I got down to the park early, checked over everything, and then had about three hours to wait while the full Ironman athletes started the swim.

Swim
I lined up in the sub-30 minute group, about 15 athletes back, and when things started right at 8:50 AM, I felt as ready to go as possible.  The swim was very choppy heading out toward the first turn buoy, and it took a lot of concentration to not swallow water with every stroke, but I felt confident that I was moving along toward the top of the group.  My space cleared after about 500 yards and I actively looked for some feet to draft.  I stayed a little behind a group of green caps (men) and stayed on some feet off and on.  The water was calmer on the long stretch between the 2nd and 3rd turns, and then very choppy again coming back into shore.

T1:  2:48
… was fast and uneventful.  Volunteers packed up our wetsuit and gear after changing.  Nice and easy for us.

Bike
I had a new fit on my bike that I’d only ridden for a couple of weeks and I was anxious about feeling wobbly or unsteady on the long descents.  But, once we started, I felt solid, though not as relaxed as I could be.  The bike is where I tend to get passed a lot, so I’ve been trying everything possible to find some extra strength and speed on this leg of the race.

The course starts out with a descent from Rainbow Park and then we head south on 99, turning around at Callaghan Road and heading north toward Pemberton.  The lanes were divided with road candlesticks to keep a lane open for traffic, and they had filled in the divots in the middle of the road since last year, making it a little smoother for cycling.  Still, some of the lanes felt narrow and the uphill sections were crowded. 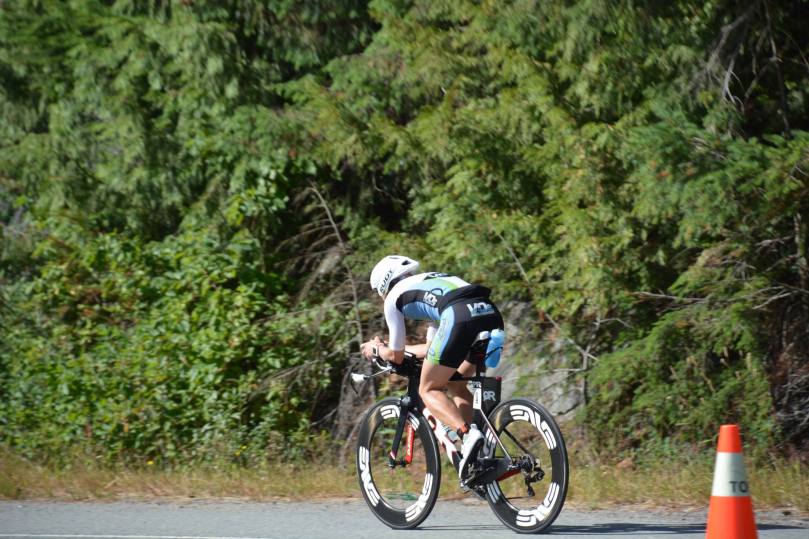 The descents to Pemberton were as much fun as I remembered and I let loose flying down them.  I hit 53 miles per hour, according to Strava, which is, I think, the fastest in my life!  My new fit was making me fly!  Whee!  Wanting badly to have a strong ride, I feared my effort was too high the whole time with my average HR constantly above what was indicated in my race plan.  This was one of those times that my perceived effort was lower than what my HR seemed to tell me, so I went with it.  I worried that I’d burn all of my matches and pay for it on the run, though, if I didn’t relax it a little bit.

I remembered to stop and look around during the ride.  Snow-capped mountains, sky, aqua water!  It was about as beautiful as it gets on a race course and I felt thankful to be out there among the races and this amazing backdrop.  After the turnaround before Pemberton it would be about an hour back to town, almost all of it climbing, and all of it with a steady headwind.  I climbed steadily, surprised that not too many women were passing me.  It was my first 70.3 in which I came off the bike still leading my AG.

Run
After handing off my bike to a volunteer I did a quick change to my running shoes and was off.  The first part of the run is climbing or ups and downs, so I remembered to control this part and keep it steady.  I rarely repeat races, but am realizing the benefit of knowing what’s coming up.  Having run this course before, it went by fast and it felt easier to know what was coming.  I kept my pace under 8s and everything felt relatively good until the last two miles.  I’m not traditionally susceptible to “bonking” in races, but this time, when I hit mile 11, my legs decided to turn into lead weights that didn’t seem to want to move!  The hard bike ride was finally catching up with me. The good news is that you can do anything for two miles, so I kept trudging at a “fast” pace, but falling from first place after the bike to third.  I’d definitely given it my all, so though I thought it may not be enough for Worlds, I was satisfied with my race.

As it turned out, our age group had two slots (!) to the Worlds, and it rolled down one place, giving me the chance to claim it.  I’ve excited, and slightly in disbelief that I’ll be racing in Nelson Mandela Bay, South Africa, in September 2018! 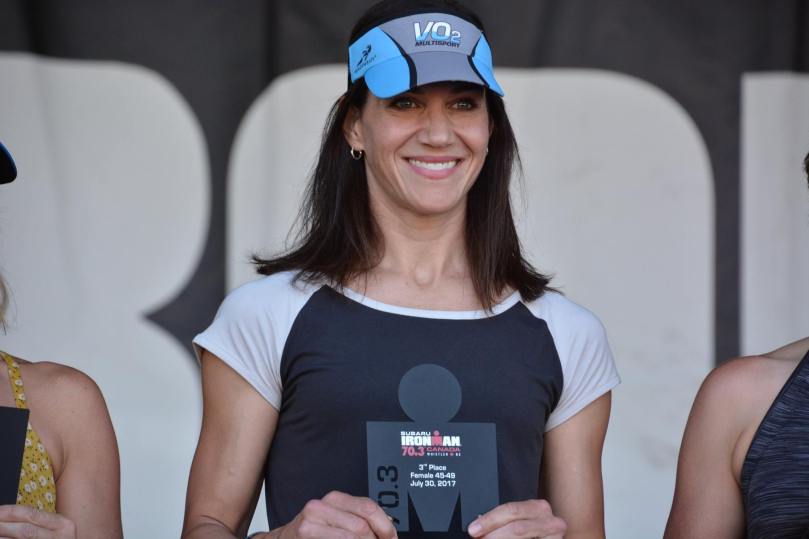 As I train over the seasons and do more races, I start to feel that my recovery gets a little bit easier, or maybe I’m just mentally prepared for what the post-race days feel like.  I stayed around Whistler for an extra night and got some good sleep before heading home.  The next few weeks would be busy with travel, so I needed to get recovered and back on my training as soon as possible.  I was tired through Tuesday night, and then finally turned the corner Wednesday, ready to bring the volume slowly back up.

Up next:  70.3 World Championships in Chattanooga, TN! 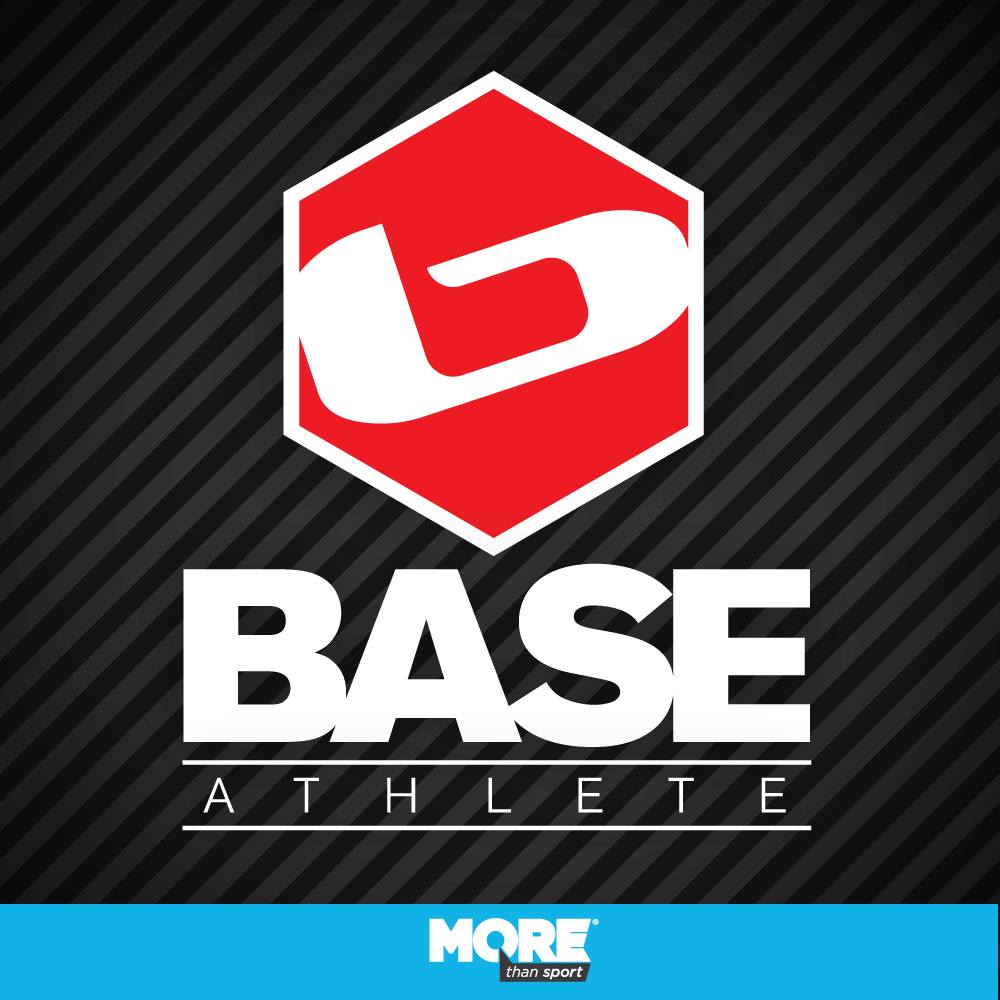